We present this monographic exhibition that reaffirms William Klein's visionary work as one of the most outstanding displays of the 20th century and, above all, highlights his clear, fierce vision at the core of modern society. 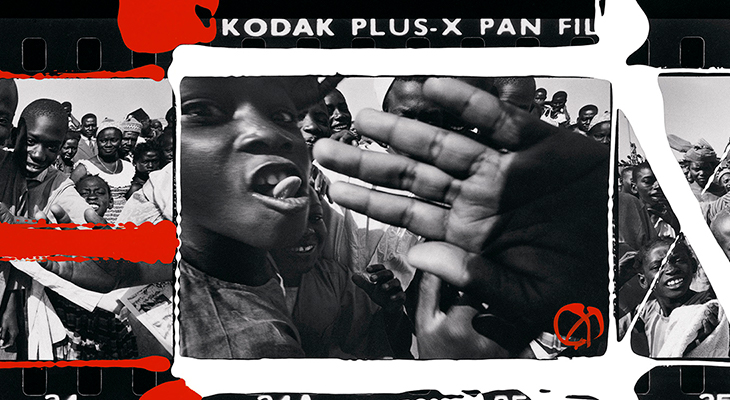 “If your photos aren’t good enough, you’re not close enough.” William Klein has always liked this famous quote by photographer Robert Capa. Perhaps this is what has always driven him to get “close enough” to his subjects, from the beginning and without any reservations.

William Klein (New York, 1928) revolutionised the history of photography, establishing the bases of a modern aesthetic that still remains to this day: one which is in direct contact with a post-war society yet to be reconstructed, imagined and dreamed of. The monographic exhibition: ‘William Klein. Manifesto‘ is the first major retrospective of Klein in our country.

Within the framework of the PHotoEspaña festival, the exhibition aims to unite all the facets of the artist’s pictorial, photographic, graphic and cinematographic work. And through these (re)discover the silhouettes of the boxer Mohammed Ali dancing in the ring, or the “boxing painting” of the judoka Shinohara: both figures of freedom over the course of a cacophonous and passionate century.

Klein began his photographic explorations in the early 1950s, focusing on light and shadow, the fundamentals of photography. At the age of 20 he moved to Paris, where he would focus his efforts on constructing his own collection of abstract paintings. Klein the painter moulds the photographic medium to his liking, using it to extend the scope of his abstract works. But soon his gaze will turn to the crowd: men, women, teenagers, the elderly, children, workers, aristocrats… In other words, human beings.

Curated by Raphaëlle Stopin, the exhibition ‘William Klein. Manifesto’ aims to reveal all of Klein’s creative lives through 245 works and documents: from his very early, rarely viewed paintings, his abstract photographic experiments, his big city series, his painted contacts, his work for fashion magazines, his films and projections… This exhibition sets out to unite all the facets of the artist William Klein’s pictorial, photographic, graphic and cinematographic work; a compendium of works that nourish each other in a constant and lasting conversation.

The exhibition thus reaffirms Klein’s visionary work as one of the most outstanding ones of the 20th century and, above all, highlights his clear, fierce vision of the core of modern society.

The multiple faces reflected in his works narrate the history of a cosmopolitan, noisy and joyful humanity, experienced and observed by a man who relentlessly rejoices in its intoxicating movement.

There is a recurrent theme in William Klein’s work: the line, which connects and structures, which sprouts and flows. Urban geometry and human geometry. William Klein’s aesthetics describe a century in motion, a century of changes, creations and revolutions. With the subject always located in the centre, near the focal point to better capture the lines of tension, Klein constructed these large complexes in the heart of New York, then in Rome, Moscow and Tokyo for a decade (the 1950s), and which are landmarks in the history of photography today.

Always on the move, the photography accompanies the crowd and blends into it. He invites a child to play here and he questions a couple on a motorbike there. Vespas riding down the macadam, neon lights that flood the Broadway night: the contemporary era is underway. Through his photography, he soon discovers show business. Klein will also be present there, working for television and doing photo shoots for the fashion press, until the cinema comes to fill the photographer’s desire for movement.

An American perspective and a European one

Born in New York in 1928 to a family of Hungarian Jewish immigrants, he grew up in the Irish neighbourhood of Manhattan. At the age of fifteen he enrolled in the City College of New York to study Sociology. During the German occupation he worked as a radio operator, drawing cartoons for the military newspaper and playing poker, which allowed him to win a Rolleiflex camera.

In 1947 he moved to Paris to study at the Sorbonne and this was to be his international launch pad, exhibiting in Milan in 1951. In 1954 he returned to New York for a few months. It was then that he met Alexander Libermann, the artistic director of Vogue magazine, who, impressed by his abstract photographs, offered him a contract. Klein would revolutionise fashion photography with his innovative method of placing mannequins in the street.

At the same time, his activity in the magazine allowed him to finance a personal project: to take ethnographic photographs of the city and New Yorkers, “just as an anthropologist would treat the Zulus.”

This project would give rise to the idea of a kind of diary of his return home “through an American perspective and a European one.” Initially, the book was only published in France.

American publishers didn’t see the image they wanted to project in Klein’s photographs, that of New York’s high society: whiter, more boring and aloof. However, the book emerged as a landmark in its own right and the Italian, British and Japanese editions followed on the heels of the French volume, which received the French Nadar prize for photography.

For Klein, New York, with its idiosyncrasies, its neighbourhoods, its carnivals and its excesses, represents an exotic land which was up to him to explain. Klein takes to the streets, mixes with the crowd, and hits the sidewalks of Harlem, the Bronx and Fifth Avenue. His photographs are not posed or taken on the sly. They’re up close and personal.

Klein breaks the rules of distance imposed by technology and social norms. He gets so close to the subjects that the wide angle deforms them, and these visual accidents lead to an original and expressionist photographic language, the seed of what is now known as “street photography.” For Klein, the street becomes a vast and generous backdrop, an open-air black and white circus. Through his bi-cultural perspective, Klein looks right back at us, eye to eye.

The Georges Pompidou Centre in Paris, the Tate Modern in London, the Fotografiemuseum Amsterdam, the Botanical Garden in Brussels, the C/O Berlin, the Palazzo della Ragione in Milan and the 21-21 in Tokyo are some of the cultural centres which have hosted Klein’s vast and heterogeneous anthology. Joining them now, from 7 June to 22 September, is the third floor of the Espacio Fundación Telefónica.

The ‘William Klein. Manifiesto’ exhibit is also accompanied by a workshops programme prepared by our educational team. There are workshops for all ages, and registration is free. See all of them here.