The Spain 2017 Digital Society Report confirmed the arrival of the Fourth Industrial Revolution, a new phase in which technology goes from being a tool that provides access to information to being a medium that offers personalised solutions based on the user’s needs.

By 2017, the number of connected devices around the world had increased by over 30% to over 8.5 billion, with more mobile lines now than inhabitants of planet Earth – 103.5 lines per 100 people. Within such a global panorama, Spain continues to lead the way in the roll-out of fibre optics in the home, with more clients than the combined total of Germany, the UK, France and Italy. These are just some of the facts and figures in the new Spain 2017 Digital Society Report.

Mobile phones advise us to change our gas tariff, check our levels of glucose and change the oil in the car. These are ever more common scenes that have become part of our daily reality, the so-called Fourth Industrial Revolution, a new phase in which technology goes from being a tool that provides access to information to being a medium that offers personalised solutions based on the user’s needs.

This was one of the conclusions from sdiE17, the Spain 2017 Digital Society Report which was presented in Madrid at an event attended by the Secretary of State for the Information Society and the Digital Agenda and César Alierta and José María Sanz-Magallón, the president and director general of Fundación Telefónica.

A round-table discussion was also held in which a number of aspects regarding digital transformation and the future challenges facing our society were analysed by the director general of ESL España, Manuel Moreno, the director of Kolokium Blockchain Technologies, José Juan Mora and the director of the Artificial Intelligence Research Institute at the Spanish National Research Council (CSIC), Ramón Lopez de Mántaras. You can see the full presentation in the following video:

– One day my child, all this will be WiFi. In 2017, Spain led the way in the roll-out of fibre optics in the home, with more clients than the combined total of Germany, the UK, France and Italy.

– Your fridge has just sent a message to the air conditioner. The number of connected devices around the world has increased by over 30% to over 8.5 billion.

There are now more mobile telephones and phone lines now than there are people on planet Earth – 103.5 lines per 100 people worldwide.

– Shopping by internet (at last!) E-commerce grew 20% in Spain compared to the previous year

– The day of sweating are numbered. 2017 saw the growth of a phenomenon based on hugely successful multi-player video games in eSports tournaments that have become mass live events.

– Virtual (and professional) goals and basketball hoops. Major companies are taking a serious interest in eSports. In 2017, video game competitions made the leap to television.

– I too can be James Bond. In February, at the Barcelona Mobile World Congress, Telefónica and Ericsson presented the concept of remote driving, with cars using 5G networks.

– Telephones rarely speak, although everybody else does. According to the Mobile Web Index, in 2018, 50% of young people were Mobile First, that is to say they spend virtually 100% of their time online via the screen of a mobile device. 86% of Spain’s of young people have a smartphone and use it as their go-to device for instant messaging, social media and the consumption of music and videos via streaming.

–Ready for the Fourth Industrial Revolution. In Spain, the technologies that are bringing about a knowledge-based society (robotics, AI and Big Data) and Industry 4.0 (the Internet of Things, cyber-physical systems and Self Organising Network or SON technologies) are making major headway.

“Digital transformation is not optional. The benefits of digitalisation have to reach everybody.”

The Spain 2017 Digital Society Report highlighted technology as the medium that will open the door to a knowledge-based society, one in which the user’s experience and evaluation creates a knowledge that in turn allows for personalised information and services. Within this process, artificial intelligence and the Internet of Things (IOT) play a crucial role, they first allow analysis and then personalised solutions in all areas, from training to health and leisure, for example.

Spain is therefore ready to make the leap from a digital society to one which is knowledge-based through its third fibre optic access network. The network is most extensive in any OECD country, according to this report which paints an original and comprehensive picture of Spain’s digital ecosystem based on external sources of renowned prestige, statistics from Telefonica’s business unit and regional information provided directly by the country’s Autonomous Communities. 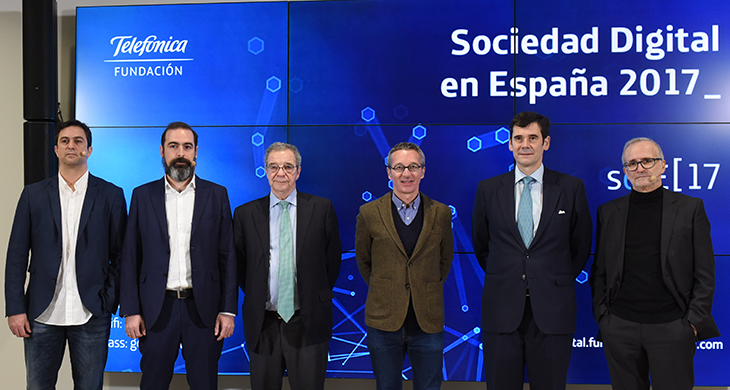 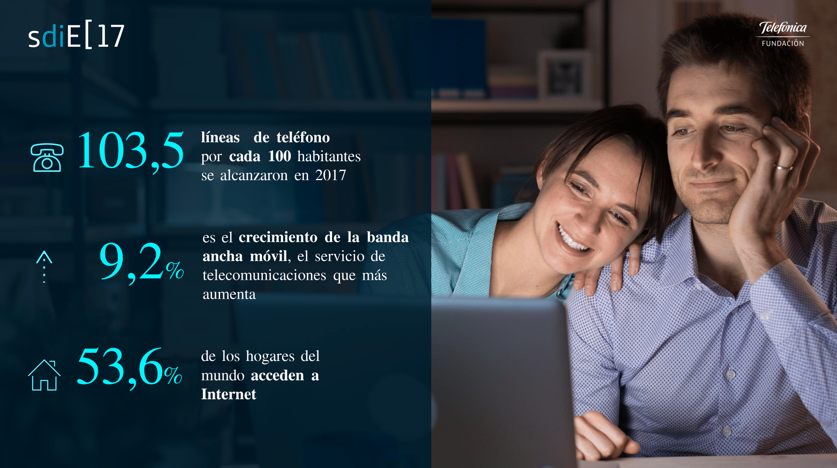 Spain is thus a truly digital society thanks to mobile broadband access, an unstoppable transformation which today not only represents a “challenge”, but also a “solution” for the country on a technological level: our future, in which robotics and AI converge, will depend on the speed with which we adapt to the new paradigm and digitalisation as an essential tool that can reach everywhere and everybody, including those who are the most vulnerable. Networks and technology are present in virtually every aspect of our life.

“Education faces up to the challenge to adapt to new employment demands. If we do nothing, in Spain there will be a deficit of three million people with STEM knowledge and skills in 2020.”

In 2017, Spain continued to lead the way in the roll-out of fibre optics in the home, with more clients than the combined total of Germany, the UK, France and Italy. Today, Spain is a clear European leader in terms of access to fibre-to-the-home (FTTH) technology, the only technology able to permanently guarantee a certain level of service quality with very low maintenance costs.

Digital Spain is also looking ahead to the new knowledge-based society in which the use of artificial intelligence and cognitive systems for all the information provided on connected devices – the Internet of Things – will offer solutions to a wide range of problems, including health, education, energy and transport, putting the country at the doors of the Fourth Industrial Revolution. Aspects such as the digital activity of ecosystems and the public sector and, of course, the most cutting-edge elements of digital transformation, economy 2.0 and blockchain, to mention just a few, all point to this change in the social paradigm that we are experiencing.

Meanwhile, these transformations have meant that in 2018, 50% of young Spaniards were Mobile First: in other words, they spent 90% to 100% of their time online connected to a mobile phone. In fact, 86% of Spain’s of young people have a smartphone and use it as their go-to device for instant messaging, social media and the consumption of music and videos via streaming.