Theo Jansen (1948, Scheveningen) published this reflection in 1990 in an article for the Dutch newspaper De Volkskrant. Since then, he has tirelessly dreamt up creatures capable of moving around on and surviving the beaches of the Netherlands: the Strandbeest, or Beach Animals. They are born, they walk about the beaches, they evolve and they die. Their lifetime is barely a year, and most of them will end up as fossils.

Fundación Telefónica Space will be the home of some of these living and fossilized creatures between 23 October 2015 and 17 January 2016. Ordis, Currens Vaporis, Currens Ventosa, Rhinoceros Tabulae and Percipiere Primus will occupy the third floor of the Space. Some of them will even be walking along the halls of the exhibition entitled Theo Jansen’s Amazing Beach Animals.

Creating a new form of fauna 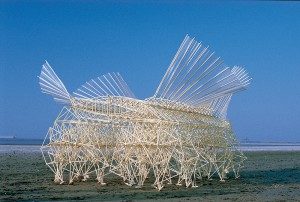 In that column he wrote for De Volkskrant, Theo Jansen said there was a need to invent animals which, like the beavers in the nature reserve of Biesbosch, would help to improve the environmental balance of the coast. He created them from “rigid electrical tubing and adhesive tape” and they get their energy “from the wind, so they don’t have to eat.” Over the years, Theo Jansen has moved away somewhat from the idea of using his Strandbeest to slow down the effects of climate change. His work today focuses on creating self-sufficient lifeforms that are capable of surviving in and perpetuating their habitats.

All his beach animals share a mathematical secret, the thirteen “holy numbers” that Theo Jansen calculated 25 years ago with an Atari computer. These holy numbers indicate the length of the tubes that make up the legs and define the peculiar way of walking of the beach animals. The artist used software to generate, select and improve hundreds of different legs. The process was repeated tirelessly for months until Jansen obtained the ideal measurements. Computer-enhanced Darwinism. 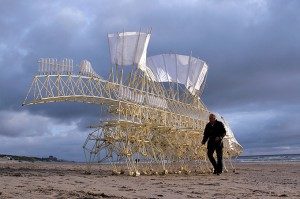 The concept of evolution is an ever-present feature of Theo Jansen’s work. The Dutch artist is constantly inventing new mechanisms for his creatures. Those that turn out to be useful survive, and make the leap to the next generations. Those that don’t work end up being snuffed out and buried. The beach animals have developed brains, innards, stomachs and limbs to anchor themselves in the sand. Most of these organs have been lost along the way because they did not help the animal to survive in its habitat.

Another common feature of all the Strandbeest is the plastic tube. In his book The Great Pretender, Theo Jansen acknowledges that the true inspiration for his animals were the yellow electrical wiring tubes so typical of the Netherlands. These bone-like conduits are the main material of the beach animals. Back then, Jansen bought 50 kilometres of plastic tubing and avoids using any other material than this, although he did use wooden pallets for a very short time.

An artist with a scientific background

Theo Jansen was born in 1948 in the Netherlands in a small coastal village near The Hague, and studied engineering and science at the Technological University of Delft. In 1986, after reading The Blind Watchmaker by British zoologist Richard Dawkins, he became fascinated by the theory of evolution and the natural selection of species. 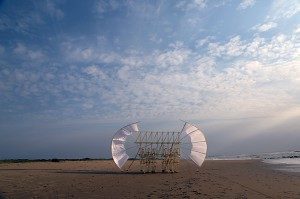 In 1990 he decided to focus his work on creating artificial beings and poured all his knowledge of engineering into his beach animals. “The barriers between art and engineering only exist in our minds,” he attests. In 2007, one of his creatures appeared in an advertising campaign and Jansen’s work became internationally famous. Since then, he has exhibited in museums worldwide.

The Strandbeest break with the traditional concept of sculpture and generate an aesthetic experience through movement. In some way they could be described as “kinetic sculptures”, but Theo Jansen’s work goes much further. When Jansen explains how his creatures work, it is difficult to separate fact from fiction. He talks about them as if they were living beings and interprets their mechanisms with copious metaphors. For Jansen, these beach animals think, breathe, feed, make decisions and reproduce. 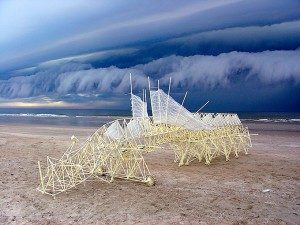 When Theo Jansen invents his animals he ventures into the environment without any fixed destination in mind; he lets himself be guided by his contact with the materials. This creative process also follows the seasons defined by nature. The animals are born in October and take their first steps in a sand pit in the autumn and winter. In spring they are released onto the beach and the artist experiments with them the whole summer until they die. The aim of these evolutionary cycles and generations of creatures is to create faster, more complex and more independent animals.

The technical details of Theo Jansen’s animals are posted on the internet and in his books. Numerous engineers and artists are now using the “holy numbers” to invent their own creatures. This is how the Strandbeest manages to reproduce. Jansen wants the beach animals to be able to live without him; for his work to continue even when he is no longer here. To some extent, that is already guaranteed.