Espacio Fundación Telefónica presents the artist’s first important solo exhibition in Spain. By means of 7 large installations, this exhibition immerses the viewer in a journey through different landscapes that transport us from a view of  clean abstract lines and a fascination provoked by majestic computer-generated mountains to the disturbing reality of an overexploited natural world.

In her first important solo exhibition in Spain, Joanie Lemercier (Rennes, 1982) immerses the viewer in a journey through different landscapes that transport us from a view of  clean abstract lines and a fascination provoked by majestic computer-generated mountains to the disturbing reality of an overexploited natural world.

By means of 7 large installations, this exhibition, commissioned by Juliette Bibasse, addresses the importance of nature in the artist’s life and artistic career and reflects on the representation of the natural environment through technology.

Pioneer in the artistic use of videomapping and co-founder of the AntiVJ collective  in 2008, Lemercier’s work focuses on creating pieces that use projected light to generate experiences that alter our visual perception. Using computer programming and the manipulation of equipment, Lemercier manages to turn the projectors into a source of light capable of transforming the appearance of objects and making us question our understanding of reality.

In contrast to the fascination generated by the digitally “manufactured” environments of the first part of the exhibition presented in Madrid, the second part of the exhibition reveals the reality of a nature full of scars caused by human overexploitation. Fascinating immersive installations of algorithmically generated landscapes, evocative volcanoes and imaginary geographies born of human-machine collaboration give way to the overwhelming image of destruction of one of Europe’s largest and most polluting coal mines. Through colossal images captured by drone, Lemercier abandons fiction to confront us with the urgency of safeguarding our environment.

Among the 7 exhibits, three of them are new creations: Edges, where the artist explores a dehumanised technological landscape; The Hambach forest and the technological sublime, exhibit in which Lemercier shows the deforestation of one of Europe’s oldest forests and  Desirable futures, a space for meditation and contemplation where the artist invites visitors to reflect on the present and imagine possible futures.

Among the other 4, we find the works Eyjafjallajökull and Fuji dedicated to the volcano series. The first is inspired by the famous Icelandic volcano that wreaked enormous havoc on air traffic in northern and western Europe in the spring of 2010 and the second is composed of a large-scale hand-drawn landscape depicting Mount Fuji augmented by a layer of projected light. In addition, it will also be possible to see Montagne, Cent quatorze mille pollygones, a piece that represents a large valley surrounded by mountains but where what the visitor actually sees is just a grid distorted by an algorithm and, Paysages possibles, a plotter acting as an extension of the artist’s hand  which draws, each time, a unique universe of mountains.

Joanie Lemercier’s works have been exhibited at the China Museum of Digital Art in Beijing (China), Art Basel Miami (United States), the Mutek festival (Mexico) and the Sundance Film Festival (United States), among other places.

The exhibition ‘Joanie Lemercier. Landscapes of light’ can be visited for free from February 11 to September 26, 2021. 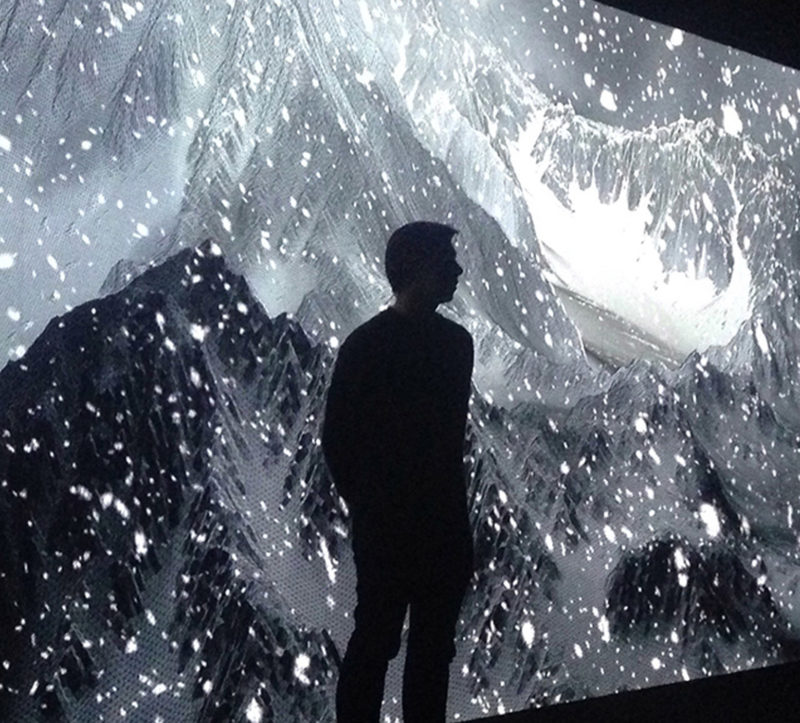