The exhibition, curated by Tatiana Cuevas, embraces three projects that form the backbone of the research undertaken by the artist in the last decade: Urban Parasites, Nomadic Plants and Self-photosynthesizing Plants. The presentation of these projects, which involved a group of expert collaborators in various areas such as biology, biotechnology, robotics, mechatronics, art and music, seeks to reflect environmental problems and Man’s relationship with the environment.

According to the curator, “by procuring the optimum media for the growth of new organisms, the crops of Gilberto Esparza are geared towards generating hybrid beings that will establish models for developing a symbiotic relationship between technology, the urban environment, and nature.”

Interviewed by the INBA, Gilberto Esparza asserts that Crops “is the result of ten years of research based on art, science and technology which addresses the boundaries between the living and the inert to generate devices for thought through art.” 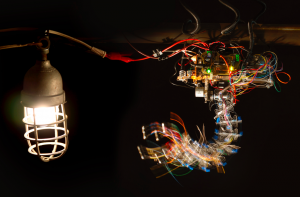 Part of the exhibition features his 2006 project Urban Parasites, which analyses the environmental consequences of technological waste. This installation comprises six pieces or parasites: Fly, Predator, Maraña, Inorganic Autotrophs, Hanging Parasite and Little Devil, all built from materials that the artist collected from technological waste dumps.

The Aguascalientes native said that the objective of this project is to “make this rubbish return as a species of organisms that barge into the city as a result of the poor management of technological waste. All of them feed from the energy they steal from the power network and make noises that become part of the urban acoustic landscape.” 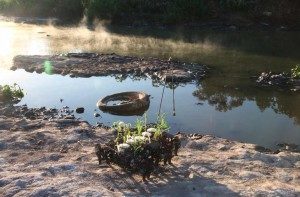 Nomadic Plants is an ecosystem within a biotechnological robot made up of plants and microorganisms living symbiotically inside the body of a machine. “This is a project that tackles the boundaries between the living and the non-living, by creating hybrid mechanisms: robot-plants, which approach wastewater treatment as a potential source of energy,” says Esparza.

The third section of the exhibition is Self-photosynthesizing Plants, which is being presented for the first time in Mexico. “The idea is a symbiotic city system that works using bacteria and other hydric organisms to generate an ecosystem,” explains the artist. 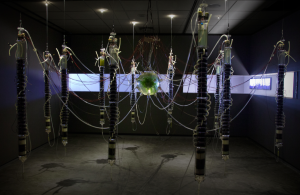 According to Gilberto Esparza, this last piece is particularly significant given that Mexico City has a hydric history that has been tampered with and affected since the city’s foundation, having never managed to live comfortably alongside water. “We bring in and waste water from other states without managing to take advantage of what there is in the city’s own space,” he emphasises.

The exhibition includes the screening of the documentaries Rio Lerma and Río Santiago, which portray the communities living along the banks of both watercourses and their relationship with the interventions of the Nomad Plants project. There will also be various talks by the engineers and biologists who collaborated in the projects to give their own point of view about the pieces. There will also be a presentation of the book published in support of the exhibition which features the viewpoints of various writers, giving a comprehensive overview of the artist’s oeuvre.