Through a set of impressive photographs and videos, it explains the innermost workings of the most powerful earth observatory in the history of humankind; the reason why it has been installed at 5,000 metres above sea level in the middle of the Atacama Desert; what it is searching for, and what it has discovered so far about our cosmic origins. 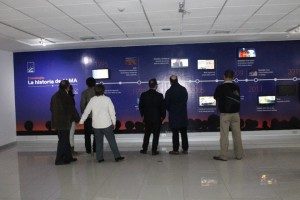 The almost 60 images that make up the exhibition are divided into four themed sections. The first is Alma Kids, featuring the illustrations by Chilean artist Frannerd for the ALMA website (kids.alma.cl), aimed at showing children the secrets of astronomy and how an observatory works by means of comics and interactive games.

A second area explains the origins, location, construction and state-of-the-art technology of the project as well as a timeline showing its history in videos.

The third area shows images of the discoveries made by scientists from all over the world using ALMA. In this section you can observe the formation of stars, planets, asteroids and the astrochemistry of the Universe. One of the standout features in this part of the tour relates to the support that the Observatory provided for NASA’s mission to Pluto to precisely pinpoint the location of the dwarf planet.

Finally, in the Ethnoastronomy section, visitors will find photographs and content on the cosmic vision of Atacama. This is a joint research project being conducted by the Museum of San Pedro of Atacama and ALMA based on interviews with members of long-standing Atacama families in order to retrieve and record in a book the oral traditions of how the Cosmos used to be observed and interpreted in the past.

A series of free activities for every age group and other special activities for teachers and students round off the exhibition, from night sky observation from the top of the Telefónica tower to robotics and astrophotography workshops, radio-astronomy classes and round tables on a variety of topics such as Art and Astronomy, Astroengineering, and how to make the most of the skies over Chile.

Teachers and students can also take part in a range of educational workshops which link educational technology and the images in the exhibition to different content in the subjects of Mathematics, Physics, History, Geography, Sciences, Language and Communication, and Visual Arts.

Given that almost half of all observations of the universe are made from Chile, come and learn about astronomy and new technologies from the expert team at ALMA.

The Atacama Large Millimeter/submillimeter Array (ALMA) is an international partnership of the European Southern Observatory (ESO), the US National Science Foundation (NSF) and the National Institutes of Natural Sciences of Japan (NINS) in collaboration with the Republic of Chile. 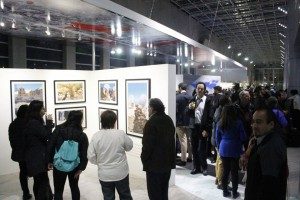 ALMA is located in the Atacama Desert and comprises a series of high-precision antennae on the Chajnantor plateau at 5,000 metres above sea level. The site was chosen for many well-grounded scientific reasons, not least its altitude and dry atmosphere.

In addition, the huge expanse of flat land around the ALMA site was idea for the construction of a major complex.

Bearing these factors in mind, the ALMA Observatory is not only unique in terms of its ambitious scientific objectives and unprecedented technical resources, but also due to its very specific and harsh environmental and living conditions in which a set of the most sophisticated radio-telescopes operates accurately and efficiently.

Another reason why Chile was chosen for the site is that there are numerous unique and important objects in the southern skies, including the centre of the galaxy and the Large and Small Magellanic Clouds.