Pablo Valbuena studied Architecture and worked in various video game and film studios and architectural practices in Holland, Canada, the United States and Spain, where he researched how spatial concepts are applied to virtual environments and digital architecture. 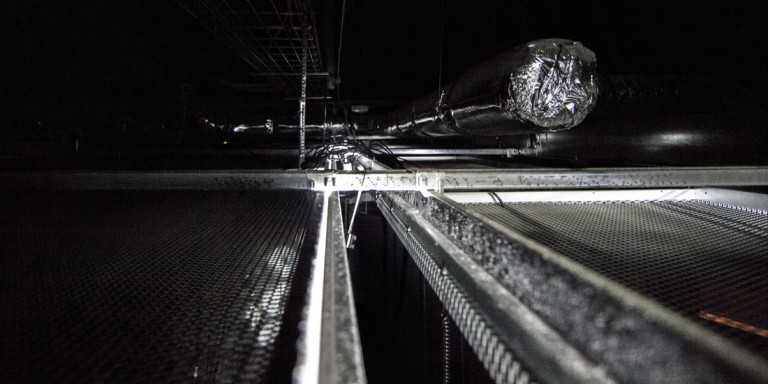 Pablo Valbuena (born in Madrid in 1978) is a visual artist whose work mainly deals with the study of space and the way in which we perceive it. Trained as an architect, his beginnings as a designer for video games and films led him to research how spatial concepts are applied in virtual contexts.

His artistic track record, which really took off from 2007, uses these factors, concentrating specifically on the development of projects in which digital images are superimposed on physical spaces. Transforming existing architectural elements by the use of light in movement, Valbuena manages to alter our perception. He superimposes a plane of information on existing physical structures which changes them dynamically. In short, he makes the real and virtual worlds exist and interlink within the same time and space.

In 2007, his work Esculturas Aumentadas (Augmented Sculptures) first used a video projection onto a three-dimensional object to suggest volumetric changes thanks to a sophisticated visual illusion.

Just one year later, in 2008, he relinquished sculptural support to begin interventions on architecture and existing spaces. One of his first large-scale projects was carried out on the façade of City Hall in The Hague, designed by the renowned architect Richard Meier, the contours of which Valbuena made disappear and reappear under the projection of white light. The result was particularly thought-provoking for those who were familiar with the space, given that the artist managed to make the spectator feel that there was no overlap between how they remembered the space and the one they experienced during the artistic presentation. He comments: “My interest lies in bringing about a certain feeling of confusion where what has previously been seen or known does not match the current experience.”

In this body of work specifically carried out on existing buildings, in 2014, in the Gare d’Austerlitz in Paris, Valbuena presented the first creation in his series Kinematope. The meaning of the title comes from the Greek words kínêma (movement) and topos (place); i.e. place in movement. Once again, the artist managed to create the illusion of light as a palpable material, turning it into another architectural element. 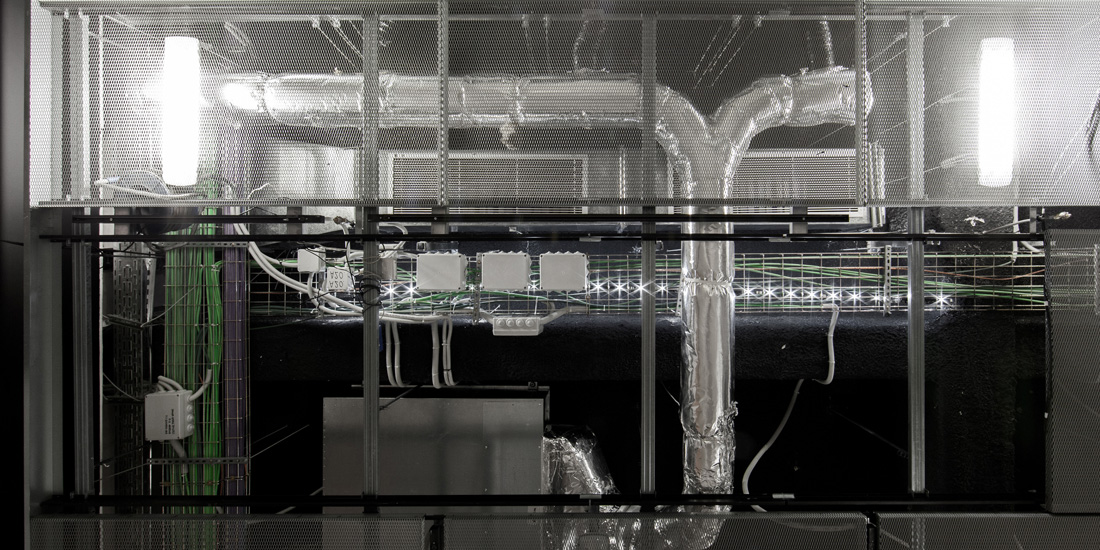 Within this series, Kinematope [technical landscape] is the installation which Pablo Valbuena developed especially for one of the showrooms of Espacio Fundación Telefónica (which is completely open-plan for the first time since its opening). A circuit of light and sound courses through the false ceiling of the gallery, defining the three hundred metres of cabling which provide the venue with electricity as well as being vital for its functional use.

The installation discloses a landscape of equipment which, despite its functional significance, is hidden from the eyes of the observer. As the critic Pau Waelder explains: “The systems which determine the conditions of the room (lighting, connectivity, temperature), normally hidden in the ceiling, are displayed in the shadows projected by the framework of LEDs and speakers which deliver the experience. Shadows and lights sketch spaces and fleeting shapes on the walls and pillars as the light and sound move around the room, following movement patterns and changing rhythms.”

In this new work, Valbuena manages to subvert architectural elements once again. Not only does he draw our attention to what is usually hidden but, instead of using the room as just a space in which works of art are displayed, the room itself becomes the artwork. Quoting Waelder again: “On entering the room, the only possibility is placing yourself within the artwork.”

A common feature of Valbuena’s work is matching the actual physical space with the virtual space he creates. In this way two apparently opposite elements coexist in the same empty space: the permanence and solidity of the architecture and the fleeting and subtle qualities of the light; the tangible and the intangible; the real and the digital; the static and the dynamic, etc. After all, Valbuena designs a new space that floats above what already exists and which, far from being constructed with physical materials, is built on perception. He comments: “I don’t think I work in a physical space, but rather in the mind of the observer.”

Certainly, the word kínêma also brings to mind the world of film, a constant point of reference in the works of Pablo Valbuena: “Films take you to another space-time world which feels real but is not.” In the same way as a film does, his works use light to engulf us in a space and a time which, in spite of being intangible, appear as real to us. As Waelder notes: “Kinematope is not confined to showing a different place on the wall in a room but to making the room itself a different place through the illusions generated there.” In this sense, the walls, floor and ceiling of the room create a kind of captivating three-dimensional screen which surpasses the two-dimensional film experience.

In short, Valbuena offers us the opportunity to see as we have never seen before this room in this iconic building, erected in 1929 as the headquarters of Telefónica. The light, something on which we do not dwell normally, an element which leaves no trace or stain, becomes a tool which the artist uses to give us the opportunity to experience space in a totally different way. As if the light changes and brings out the reality of what we usually cannot see, the viewer is transported into a virtual space and time, whilst maintaining the real.