Luis González Palma (Guatemala, 1957) lives and works in Córdoba (Argentina) and is considered one of the most important Latin American photographers of his time. As part of PhotoEspaña, Espacio Fundación Telefónica will host the work of this Guatemalan artist from 11 June to 18 October.

His work is impregnated with a symphony of formal solutions

The exhibition, curated by Alejandro Castellote, invites the viewer on a retrospective tour using the constellation of themes that make up the artist’s universe. His reflections on identity and memory, introspection and intimacy and the representation of the invisible run parallel to a formal experimentation which gradually leaves 2D traditions behind and touches on a more sculpture-like way of experiencing photography.

According to Alejandro Castellote, curator of the collection: “Luis González Palma’s universe is made up of a constellation of themes orbiting around his work , constantly going to and fro. Identity and memory, –the axes of his first works- are tackled using portraits with constant echoes of religious and baroque painting. Other overarching themes found in his work are introspection, intimacy, reflections on power and representing the invisible. His work is impregnated with a symphony of formal solutions which are, in his own words, “an attempt to give body to ghosts that govern personal relationships, religious and political hierarchies found in life”. In his most recent work, portraits are displayed as shrouds reconstructed from disparate fragments, stitched as if wounds, turning the sutures into a metaphor of our path through life. The pieces in this collection, some made specifically for the exhibition, are particularly attractive because they transcend the two dimensional format of photography through adding textures or other material that invite viewers to use other senses”.

Luis González Palma was born in Guatemala in 1957. Having concluded his studies in Architecture his interest in art, painting and photography led him to study these fields more intensely and to contact other Guatemalan artists. In 1987 Luis González Palma and Moisés Barrios founded the Galería Imaginaria gallery in Antigua, Guatemala, a gallery that hosted the country’s dissident artists.

Later, in the late 80s, he joined the group which founded Colloquia, an initiative aimed at promoting, debating and disseminating modern art in Guatemala. Following several periods of residence in Europe he returned to Guatemala in 1998. Luis González Palma relocated to Córdoba, Argentina in 2001 where he began collaborating on several projects with Graciela De Oliveira.

Since his first exhibitions in Central America, the US and Europe, until the present day, his work has been essential in understanding Latin American photography. He has held innumerable solo exhibitions at spaces such as the Art Institute of Chicago, the Lannan Foundation, the Australian Centre for Photography, the Palace of Fine Arts in Mexico, the Royal Festival Hall in London, the Palazzo Ducale di Genova, and the MACRO and Castagnino de Rosario museums in Argentina. He has also participated at several international festivals such as Photofest in Houston or Les Rencontres de Arles in France. Luis González Palma represented his country at the 51st Biennial in Venice.

All of Luis González Palma’s artistic exploration can be seen as an in-depth reflection on viewpoints, questioning history and the human condition. His first series strongly voiced a critical point of view regarding his country’s social and political situation. His portraits, and the ethnographic material which accompany them, are allegorically covered by a veil of silence, a metaphor for that other silence that was imposed on his generation by the ever-present civil war fought in Guatemala (1960-1969).

His photography can be divided in three creative phases. The first, from the late 80s, sees the artist using photography to show a different image of his country, deeper and more intimate, from a critical standpoint. The majority of his work from this period are frontal portraits, featuring the steady gaze of Mayan individuals and popular and religious symbols. Over this period he used a rich and polysemous symbolic language and iconography that destabilizes any single, dominant viewpoint. The focus on the face and gaze looks for traces of trauma, irreparable and irreversible loss, pain, silence and symbols of transgression, reflecting the violence suffered by Guatemala over five centuries.

Generally, his photographs from this time are printed on non-conventional surfaces and are later treated with materials such as tar, crude oil and gold dust to add sepia tones and a slightly aged appearance. 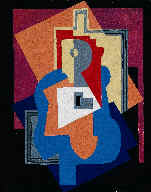