From Madrid to the Moon

Everyone knows that the Apollo 11 mission was a success, but few know the role that Spain and, specifically, Telefónica played in this achievement. We’ll explain all about it in our new mini exhibition. 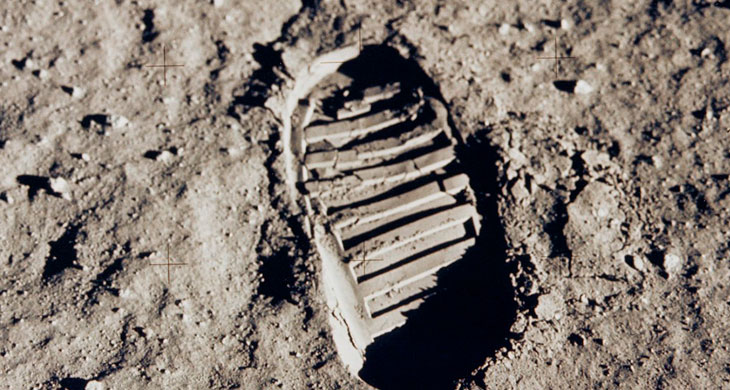 The Efeméride Space is renewed with our latest mini exhibition. A journey through time that will allow us to immerse ourselves in the event that hit TV screens, monopolised the headlines and captured the attention of the entire world fifty years ago: the arrival of man on the Moon.

In 1961, President John F. Kennedy promised that the United States would send an astronaut to our satellite before the end of that decade. Thus, an unprecedented scientific and technological challenge involving almost 400,000 participants began. Among them were more than 400 Spaniards who, from Spain’s two main space monitoring stations, played a fundamental role in the mission.

But who were those 400 people? What made NASA choose Spain to locate these stations? What was the role of the Compañía Telefónica Nacional de España (Telefónica’s official Name at the time) in all of this?

Through panels, videos and original documents, the exhibition reconstructs the events that made the journey into space possible and provides an international context which makes it possible to understand when and how Telefónica and NASA began working together. Along the way, we will gradually reveal the story of those Spaniards who dedicated themselves to making one of the greatest feats of the human race possible.

The exhibition contains some items of historical value and space models, as well as photographs and certificates of recognition by NASA to the Telefónica personnel and patches of the various Apollo missions. The noteworthy items include:

20 July 1969. A new chapter in history was written when humanity, represented by the astronauts Neil Armstrong and Buzz Aldrin, took its first steps on the moon’s surface. Everyone knows that the Apollo 11 mission was a success. However, what not so many know is that the launch was about to be cancelled at the last minute, due to a communications problem. And few also know the fundamental role that Spain and, specifically, Telefónica played in this achievement.

In the years prior to the moon landing, the Americans had been signing agreements with various countries to host monitoring stations for their spacecraft. Spain was one of the chosen sites, and in 1960 the Canary Station was established in Maspalomas to give support to the Mercury Programme. It was at this time that the Compañía Telefónica Nacional de España began to provide its services to NASA, ensuring communications between the primitive mission control centre, which would later be known worldwide as Houston, the spacecraft and the astronauts.

Telefónica had been following emerging technologies in the field of satellite communications closely, especially since 1963. It was therefore one of the founding members of the International Telecommunications Satellite Consortium (INTELSAT). In the mid-1960s, NASA asked Telefónica to set up two new tracking stations in Spain (Buitrago and Maspalomas-Agüimes), which would cover the famous Apollo Programme. These missions required larger and more powerful antennas and equipment in order to handle a greater volume of data, voice and even satellite television. Throughout this process, Telefónica’s mission consisted in providing operational support to the missions.

After Apollo 11, Telefónica continued to provide a valuable service to NASA in the lunar missions that took place, as reflected in numerous messages of gratitude from the agency. NASA placed its trust in Telefónica from the beginning of this great space race as a reliable partner to achieve what was once just a dream: to conquer the Moon.