This year’s programme in the series ‘Living in a Sea of Data’ organised by Fundación Telefónica consists of two sessions, the first on Artificial Intelligence (AI), which took place on 7 April, and the second which will take place on 19 May, on Industry 4.0 and new Spanish start-ups. Both sessions take place in the Auditorium of Espacio Fundación Telefónica and are moderated by the journalist Rafael Luque.

The first session was opened by Rosa María Sainz Peña, Head of Publishing Projects and Operations at Fundación Telefónica, who emphasised the importance of a series on the world of data in order to “convey the idea that we live in a historic time in the practical application of technologies and concepts such as Artificial Intelligence and Connected Industry or Industry 4.0”, the two technological trends on which the current programme in the series focuses.

The first session started with a talk by Ramón López de Mántaras, director of Artificial Intelligence at the Spanish National Research Council, on the strengths of Artificial Intelligence and the challenges still facing it. Among them is the lack of common sense in robots which prevents them from correctly interpreting phrases and situations which are easy for humans. Because of this, he believes that the human/machine combination is the most appropriate in the field of Artificial Intelligence and defends the theory of Advanced Chess (aka Cyborg or Centaur Chess) introduced by former world chess grandmaster Garry Kasparov, which believes that the team formed by people and machines is always better than either of the two acting independently.

This was followed by Álvaro Otero, COO of Big ML and expert in machine learning as a service (MLaaS), who gave a demonstration of a practical use of data mining: an analysis of data to predict which of a bank’s customers will repay a loan and which will not. Also, Javier Placer, CEO of Telefónica Open Future, spoke about a data mining tool jointly developed by Telefónica Open Future and Big ML called PreSeries which tries to predict the success of investment in technology firms.

Lastly, Juan García Braschi, Country Manager in Spain and CFO of Cabify (the app for chauffeur-driven cars used in Spain, Chile, Peru, Mexico and Columbia) gave a presentation on the company, started in 2011, as an example of the practical application of data analysis in the creation of new business ventures.

At the end of the event attendees were given copies of El trabajo en un mundo de sistemas inteligentes, (Work in a World of Intelligent Systems) published by Fundación Telefónica which addresses the changes caused by the introduction of robots in production methods and the consequences of this in the labour market. This paper is also available as a free download on the Publications page of the Fundación Telefónica website. 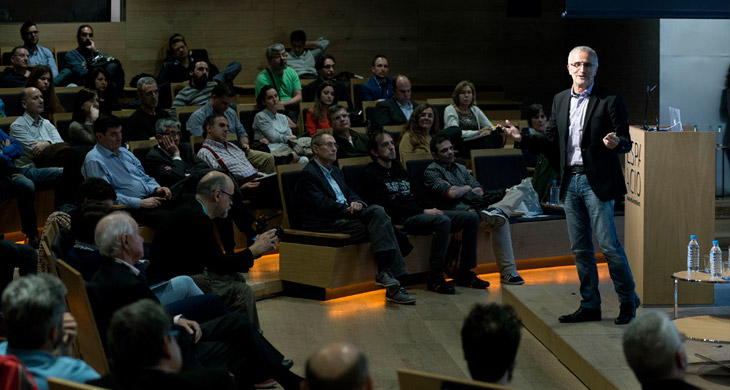